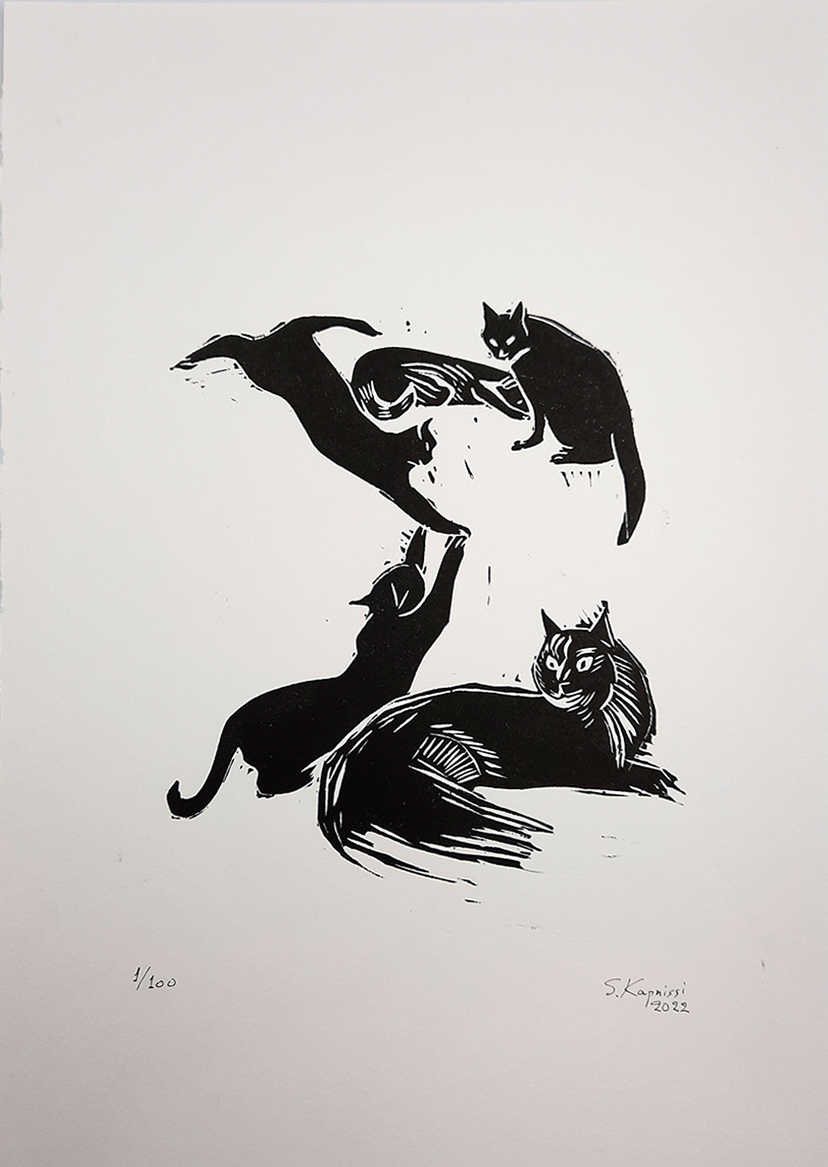 A series of lino prints with cats

This new series of lino prints started with the image of a sleeping cat lying on top of a couch. Then came the ‘Cat in snow’, a tiny lino print in two versions, printed in black and in red. This design is inspired by the music performance “Thomasina” presented by the youth string orchestra Swing; the music performance is in its turn based on the film “The three lives of Thomasina” of 1963. The series contains seven designs; in some there is more than one cat present; they can be viewed here.

Lino print or lino-cut is a relief engraving and printing technique where one or more linoleum (lino) plates are used as an engraving surface. Linoleum is a material based on solidified linseed oil, invented in the mid-19th century in England. It is more known in its use for floor covering – think of corridors and kitchen floors – due to its durability and flexibility.

In engraving art, linoleum is used just like wood. To some extent it has substituted the wood plate, to the horror of traditional engravers. However, now we are more than one century away from its first use as an engraving surface, so its use is equally accepted as the use of wood. Linoleum is easier than wood to carve because it is softer. The argument against it is that it does not have the charm of wood, which passes its own relief character onto the print; plainly said, linoleum is a flat surface and that’s all it is. Less of a challenge yet easier to cut, easier to find without much variety in quality, and cheaper than wood. This speaks in its defense too.

A short description of how a lino print engraving is done follows, as a basic explanation either for trying it out or for knowing how it is done next time you see a print in an exhibition. Should you decide to try it, remember to always carve in direction away from your body, to make sure you won’t stab yourself. Also, the hand holding the plate must be out of the carving area. It is recommended to use a wooden cutting board with a tilted edge, so that the linoleum plate pushes towards this edge when you’re carving.

The idea of engraving and printing is that we have a design that we want to reproduce in several copies. To do this, we first copy the design (a drawing or a photograph) on transparent paper. Then we reverse the transparent paper and with the use of carbon paper we transfer the mirror image of the design on to the linoleum.

Helpful note: Before anything else, it is good to slightly sand the linoleum plate. This improves the printing quality in terms of ink grip and coverage. Sanding the plate is especially needed when the ink to be used is water based. Regarding sandpaper smoothness, the higher the grit number, the smoother it is. We sand linoleum plates with a smooth sandpaper nr 100 first, and nr 150 (fine grit) to finish. This is done lightly and shortly. After sanding, sweep the plate with a soft piece of cloth. Then the plate is ready for the engraving procedure.

The transferred image – mirror image of our design – is then cut into the linoleum surface. There are special carving/cutting tools for linoleum (and wood) in different shapes and sizes, like V, U, and square gouges, knives, etc.

Helpful note: If the linoleum plate is too hard, it helps to heat it slightly before starting with cutting, for example, let it sit in the sun or on a radiator.

The uncarved areas of the surface will be inked and printed. The carved areas – the areas where the engraver cuts into the surface – will not appear on the print. The cuts can be lines or forms; small or bigger areas cleared. Lino prints (and wood prints) aim in balancing the black and white areas with minimal use of tones. Where different dark tones are aimed, their range is given through stronger or weaker cuts; in density and/or repetition.

Multi colored prints are usually made with a separate plate for each color. This type of print has a different focus and deserves a separate chapter.

When ready for printing: The ink is applied on the carved surface with the use of a roller so that the relief (raised surface) takes on the ink while the cut/cleared surface does not. Lino prints can be printed either in a press or by hand. Printing in a press results to less copies because the linoleum is squeezed and thus flattened fast. Printing by hand – also called hand-pulling – allows for more control on the pressure applied on the linoleum plate. It is usually done with a big spoon; a metal or wooden spoon will do. After inking the plate, we put the paper on it, and we press it gently with our hands to feel that the paper sticks on the plate evenly. We press the back side of the spoon with gentle round movements throughout the surface that needs to be printed. Once we’ve gone through the whole surface, we pull the paper gently from the linoleum plate.

After each copy, we ink the plate again. In principle we don’t clean the plate unless there are impurities that need to be removed.

For hand printing we use lighter paper than for press printing. The light(er) paper is up to 100 gsm, which makes the paper stick on the inked plate and we can also see the progress of printing. Soft types of paper work out the best.

When the carving has reached a good progress point, a proof print is made. Proof prints are made upon the decision of the engraver. After each print, the plate is swept with a piece of newspaper; you can put a drop of water on this piece of paper, if you’re using water based ink. The plate does not have to be cleaned thoroughly but the more ink is removed the easier it is to go further with carving. The engraver uses the proof print for deciding which areas still need to be carved, which lines need to become thicker, etc.

A proof print is a try out, an impression of the lino print artwork at any given stage before the final result.

The number of prints made of a plate make an edition. We number each print on the left side under the image. For example if our edition has 10 copies we mark the copies like this: 1/10, 2/10, etc. On the same line in the middle we write the title of the work (same for all copies), if there is one. On the right, we put our name/signature and the year of creation.

I make notes on work processes, especially on art techniques. Engraving is a time consuming technique (or techniques, as there are a few types) which also demands a specific mind setting. There are several publications about engraving and I intend to add mine; t.b.a. This is an earlier post about engraving.

The project ik-snap-er-niks-van is inspired from and dedicated to all the people who admit to not understand what's going on. In what situation? You name it! Dismiss